A tribute to RON TUFFEL: a life of heart and soul 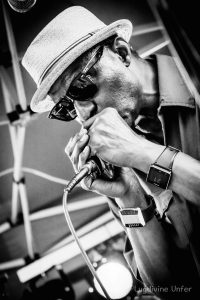 Ronald Tuffel, Ron for friends, was born in Texas, grew up in Kansas, and studied at the Miami University of Ohio, USA. This American-born but Luxembourg-married “nouveau Luxemburger” (as he liked to call himself) left an inerasable trace in the Luxembourgish music scene.

Apart from being a charismatic basketball coach, Ron had other activities which were very close to his heart. Being a radio presenter was one of them. Radio ARA in Luxembourg City was his home for 17 years during which he ran two radio shows: one was a community program called “Tuesday Bistro” and the other was a music program initially devoted to Afro-American music, but which naturally developed into a radio show that welcomed musicians from all over the world.

“I knew Ron Tuffel as a radio personality first, and then as a musician. I remember meeting Ron for the first time at Radio ARA in 2011. Since then, every time I had something musical to present to the world, a record, or a CD release show, I would go to Ron because his door was always open. No matter who you were, he spoke to you like you were the most important person in the room. He always seemed genuinely interested in what you were doing, no matter how mundane. He had a gift for lifting people up and every time I left an interview with him I felt like I was doing something important. That was more than a skill, it was an instinct for knowing people.” – Lata Gouveia

Another of Ron Tuffel’s passions was playing music. He was a harmonica player and a singer in several bands, the latest one being “Sneaky Pete”. Wherever and whenever he hit the stage, he owned it. The jam sessions at LiguID Bar in the Grund, the yearly “Jazz & Blues Rallye” performances in Luxembourg City, and the “Blues after work” sessions at the Neumünster Abbey, were only some of the highlights. With his musical talent, his love for Blues, Soul and Funk and his spirit, he fired up any stage he graced in a matter of seconds.

“Ron Tuffel was a real storyteller, with an open heart and with a great sense of humor, always ready to jump on stage, or share some great stories from the time he lived in the USA. Unfortunately, we never played in a band together, but we have jammed thousands of times! I remember the time I was playing with the Fred Barreto Group at the humanitarian concert for the victims of the earthquake in Haiti. When Ron heard the riff for “Going Down” by Freddie King, he jumped on the stage, asked me the key of the song, took his harmonica out of his pocket and brought the house down with us! He loved Freddie King! He loved Texan Bluesmen, like Freddie King, and Albert Collins..” – Fred Barreto

Bass player and guitarist Tom Heck met Ron Tuffel when he was only 13, at one of his very first jam sessions at the LiquID Bar. “Ron gave me support from the very beginning of my musical journey, even though at that time I did not actually understand music, I remember him saying”I like the feel you have and the way you play.” He always had a way of being cool and making people very comfortable around him. Over the years, I played a couple of times with him, and weather we would jam, have mind opening conversations or just sit quietly and enjoy a beer, it always felt so right… Even today, I still reflect and learn from all the good moments we shared, and he still makes my life richer. Ron’s soul goes beyond life as we define it, he lives on in our hearts because he was a part of something grater.” – Tom Heck 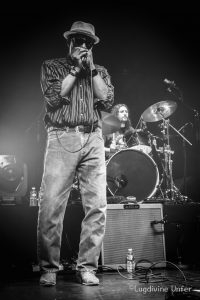 “He was a harmonica player, and those musicians can have a hard time getting on stage, unless they are the leader of the band, of course. But Ron was different. He had this thick-skinned approach to getting on stage. Once he was up there, he was amazing, he had charisma! … I remember doing a big CD release show with the Lata Gouveia Band in Kulturfabrik in 2014. Ron was hanging out with us backstage, and I found out later that Andy Hayward was trying to keep an eye on him not to let him jump on the stage unannounced, as we were multi-track recording the show. Of course, he got up anyway finishing the show on the stage with us. It was a massive celebration! We laughed about it together during my last interview with him in the early days of the summer of 2016. It is really hard to imagine he is not going to be here anymore.” – Lata Gouveia

With his music talent, his amazing spirit and infectious laughter, Ron Tuffel was a true gentleman of the Luxembourgish music scene, he was a true inspiration and a great supporter to all, his students, his colleagues at the Radio ARA, and his fellow musicians.

We thank you and we salute you, Ron Tuffel!