Upon induction each of these artists brings between 2 and 4 original songs into our Club Catalogue. And after the induction show, each official songwriter can submit new songs to the club via our Open Mic events. Official club songwriters also become eligible to be invited back to the Songwriter shows as a returning guest, and eligible to represent the club in our Sampler Shows.

The songs follow a different path. Each song that comes into our catalogue is presented first at our Open Mic Sessions. They must be songs written and performed by a single songwriter. Co-written songs can be accepted but only if all writing partners are official club songwriters. The song goes into a working folder that is accessible to our singers, songwriters and to the Grund Club Band. When we create the Set List for the next Songwriter show, we always go back to the working folder and “fish out” a couple of songs to induct.

If we induct a song with the full band, the is re-arranged for the club. The rhythm might change, as well as the tempo, key and the structure of the song. However, some of the new songs are also presented at the show as acoustic solo songs, not necessarily performed by the original songwriter.

Each of the Songwriter Shows is video recorded and multi-track recorded, allowing us to post-mix the shows. Each show set list contains 20 songs, so at the end of each year we have 80 performances of club catalogue songs to chose from for our yealy CD. This CD contains 12 of the best performances. Every CD song is sang by someone other than the original songwriters and we try to feature as many songwriters and as many voices as possible. The CD for each year is released at our Christmas show.

The project should be understood as a long-term project. By the time the Grund Club celebrates its 10 year anniversary, the club should have 50 official songwriters, over 220 songs and around 100 songs recorded and released to professional standard. During the same time, some 50 additional singers will have performed many of those songs too, in our Voices shows, Sample shows and other events. All of this activity generates copyright revenue for the original songwriters, paying shows for the musicians and great experience in interpretation and stage presence for our singers. Over time, some songs will drop to the bottom of the catalogue, and some songs will become club classics… and Luxembourg classics, naturally. 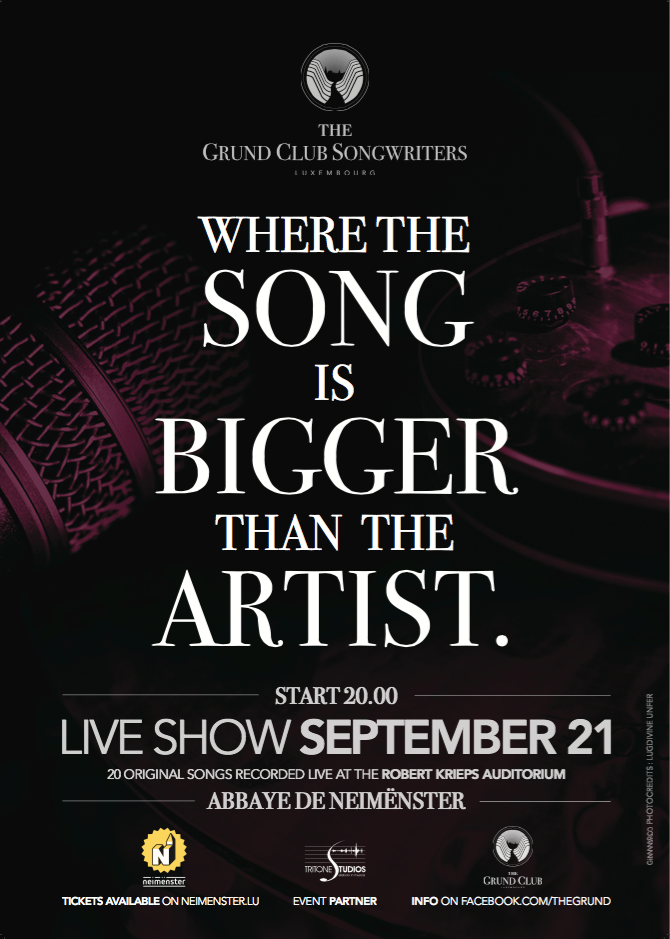