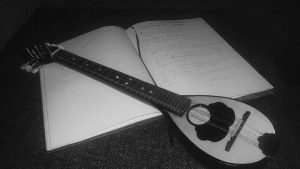 “The song ‘Fallin’’ stands for all those moments in life when you feel completely lost and you struggle to find answers. Those moments happen to everyone, like when you do not know what you really want, where to go or even sometimes who you really are. I was in that exact mood when I was writing this song. It was a very difficult process and it did not come out as naturally as other songs. I really had to work on the lyrics, and there were many changes in the main riff and the chords until I finally found its final version. In a way, the song represents the very process of going inside of yourself, in order to re-connect to the well of creativity and peace.”

“This song was inspired by my hosting of The Grund Club SONGWRITERS live show on December 11th, 2015, in Neumünster Abbey, Luxembourg City. This wasn’t my first time hosting such a big music event but that day I just got caught between wanting to say so much and my own nervousness, so that in the end I just ended up with my mind frozen, right in the center of the stage. Day after, I was still frustrated and very unhappy with my performance, feeling the disappointment to my very core. I sat down, took my guitar and just let it out of my system. The chords, lyrics and melody were flowing out naturally. After finishing the song I was happy that a bad day gave life to a new song..”

Oh baby, take me by the hand
And make me dance

We are looking forward to additional new songs in The Grund Club SONG CATALOGUE.